I vastly underestimated the number of parts and work involved in cleaning up the Extremoth.   I’ve also been sidetracked with World of Warcraft, so not all blame is to be put onto the model.  In fact, the model’s not to blame at all, it’s WoW.

That said, progress has still been made, just not nearly enough of it.

The Greylords are assembled, for the most part.  Riders are assembled, horses are gap-filled and cleaned up, but are awaiting paint testing to make sure the gap fill is smooth.  My focus right now is finishing the Extremoth build, so I can clean up the work area and shift 100% into painting.

Anyway, here’s what my desk looks like right now. 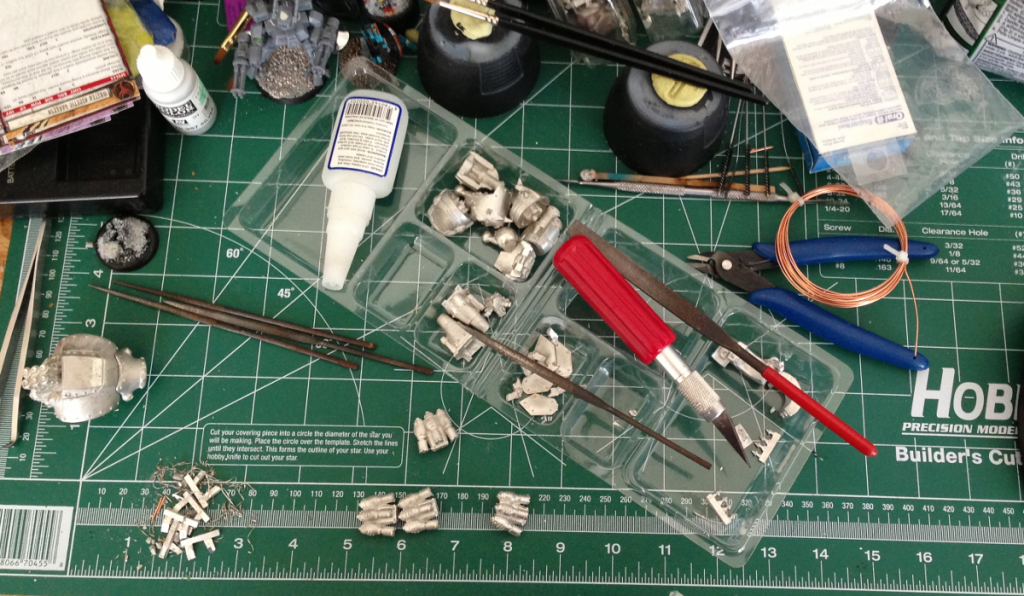 Most of the parts are cleaned and ready to go, I’m starting to look at the thingys from the Behemoth’s hands, and trying to figure out just how I want to go attaching them to the bug fists.  I really want to just separate them from the frame they’re on, but that looks to be a considerable amount of work.

I’ll probably do it, because that’s going to give me the best look.  I’m also trying to figure out the cleanest way to attach the guns to the shoulders.  The curvature of the racks doesn’t even come close to lining up with the curvature of the chassis.  The standard procedure is to plug that all up with green stuff and clean it up a bit, but it’s so hard to get green stuff to be smooth, and I’m wondering if it’s not worth maybe just constructing the gun tracks from scratch.

I will be doing a How-to on how I built the Extremoth, but I’m going to do it all at once, at the end.  I figured that was one of the reasons some of you picked this army.

Since I continue to have cruddy update posts, read about some of the other folks in my Journeyman league: