Man, what a trip.  This was the first time I’d taken the train, and it was a blast.  I traveled with the crew from Advanced Maneuvers, and got to learn all about non-profits from some lovely business folks on the way from Philly to NYC.  I glued grass to bases during the train ride, and took stock of what I needed to finish painting once I got to the hotel (Carnivean, Seraph, Thagrosh and Blighted Bather, mostly).  Wednesday night was filled with fond hugs and cold beverages as I met up with friends from all around the world.

I managed to find respite with Captain Spud, as he finished up his Infinity Terrain.  I got some work done on the Seraph while waiting for the owner of my hotel room to arrive and check-in.  After that, it was more painting in my room after a shower.

Remember the 1-2-3 rule for conventions:

Thursday morning kicked off Iron Arena at 10AM, and thus I began the con with my customary first PG Shift.  Since I wrote the software we use to track the 526 players and 946 games that were played in the Iron Arena at Templecon this year.  Once we got everyone registered and playing games, I was able to sneak in some time painting while waiting for the first batch of players to finish and report their games.

One of the highlights of the first Iron Arena shift is that you get to help organize and display all the pretty things that Iron Arena players can win.  There were the customary tokens and widgets from Privateer Press, along with some cool posters.  Additionally, they brought us some amazing color art prints, a few of which we’d never even seen before:

Once my shift was over at 2pm, I kept on painting at the IA desk, keeping staffers company and chatting with whomever stopped by.

Then, I got the notification I’d been waiting for.  My package had arrived at the front desk.  What package?  The one with the… 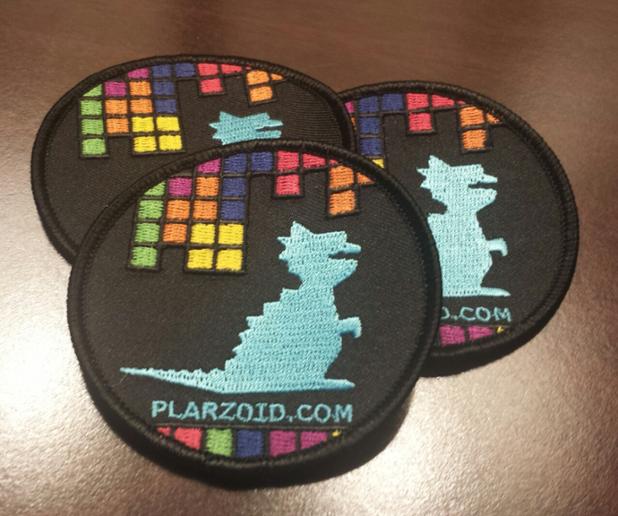 Boy, are these things cool.  They’re peel-n-stick, and all of the embroidery is nicely embossed is actually 3D!  I love having something to give folks when we finish a game, and these will suit that purpose handily.  Special thanks to my art department over at LNWC Design!

Now that I had my swag to give out to folks I played games with, I was ready for Iron Arena.  I played games until almost 3AM, when I finally decided I should go to bed.  After all, I did have a 10AM PG Shift.

But, wait, isn’t 10AM when the Privateer Press Keynote starts?  Did I really put myself on shift during the keynote?

But, a live streaming Keynote helps make it worth it.  That was my matra while manning a mostly deserted Iron Arena play area.  Some players were hard at it though, fueling their games with Kracken and other booze-o-hol.  The Iron Arena tables were so dead at 6AM, though, that the other PG on shift and I played a game while we waited!

Once 10AM rolled around, it was time to see what all the hype was about.  I prepared to try my hand at Live Tweeting with @gdaybloke from Lost Hemisphere, and we did pretty well, if I do say so myself.

New Colossals!  Yay!  The models & art look gorgeous, and got a positive response from the audience.  I am holding judgement until I know all the rules, but I’m also definitely looking forward to painting some big stompy robots when they come out!

I Iron Arena’d for the rest of the day.  One of the folks I played against was Pszito (Nick), who is a previous Master Craftsman winner.  He and I enjoyed a Thag1 vs Thag2 game (in which he stomped me completely), and we discussed art and miniature painting.  It was awesome, despite how sleep deprived I was.  Check out his stuff here: http://privateerpressforums.com/showthread.php?38040-Pszito-s-Painting-Posts

By the end of the day, after a rather quick Thunderdome game, I’d played enough and gotten enough points to win myself an awesome piece of Concept Art: Zuriel! 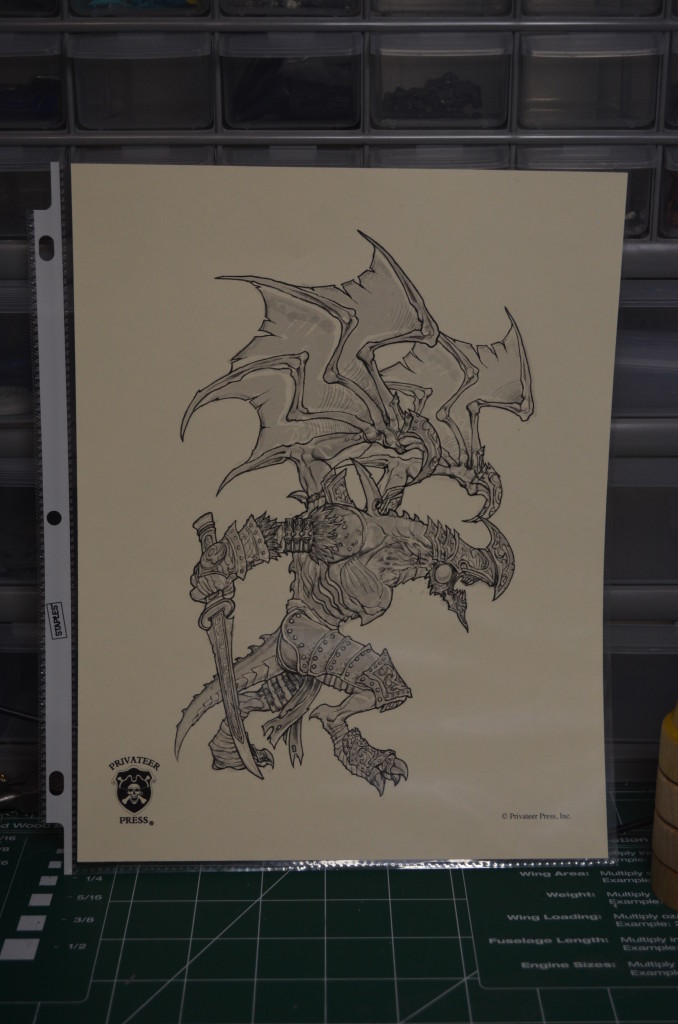 I love that there is concept art for prizes at the Iron Arena desk, and I’ve made it a goal the past several years to snag one ASAP.  You can’t buy them anywahere, and often they’re signed by the artist.  Too cool.  Goal #1 achieved, I retired to paint dangly bits (gems, I think) on Spawning Vessel Acolytes.  It’s hard to do when you can feel your brain trying to shut down every 5 minutes, since you’re on 3 hours of sleep in the past 48.

After getting about 6 hours of sleep, for better or worse, it was the day of the Hardcore event.  This was the big one.  I had to stick through five rounds of 50pt games at 7-minute turns.  I didn’t have to win any games, but I did have to stick through it.

I was paired up against a Domiano list.  I don’t remember much about that game, other than that he had Rocinante and Nyss Hunters.  We fought for a bit, and I was eventually able to Mutagenesis Madelyn Corbeau, and pop up right next to Domiano.  I threw everything I had at him, and he took it like a champ.  I brought back the Carnivean, but didn’t wither Domiano’s counter-attack the next turn.

I was up against Retribution, specifically Garryth.  I’ve never seen him before (outside Thunderdome) so I wasn’t very familiar with what he did.  Before I knew it, his army had pushed and pulled all my stuff around so there was a clear charge lane.  A few Grievous Wounds later, and Thagrosh was a dead ogrun.

God, what a slug fest.  My opponent ran a Xerxis 1 list (not Fist of Halaak), and had loads of medium bases.  I had trouble killing him, and he had trouble killing me.  I made three lessers from the pot, and he killed all four beasts and the Seraph a second time.  He ended up getting 71 AP from me, since he only left the Succubus and a Shepherd alive to tell the tale of his military might.  Near the end of round three, I was told that when my game was over, I should set up my army over on Table 1 for appearance judging.  That got my stomach all up in a knot of excitement and worry.

After Round 3, we were informed that they were cutting to the top five (six, really) players.  They needed the tables for the next event.  They gave out the Executioner award to my Round 3 opponent.  I imagine the 71 points I gave him really helped.

And then they gave me the Master Craftsman award. 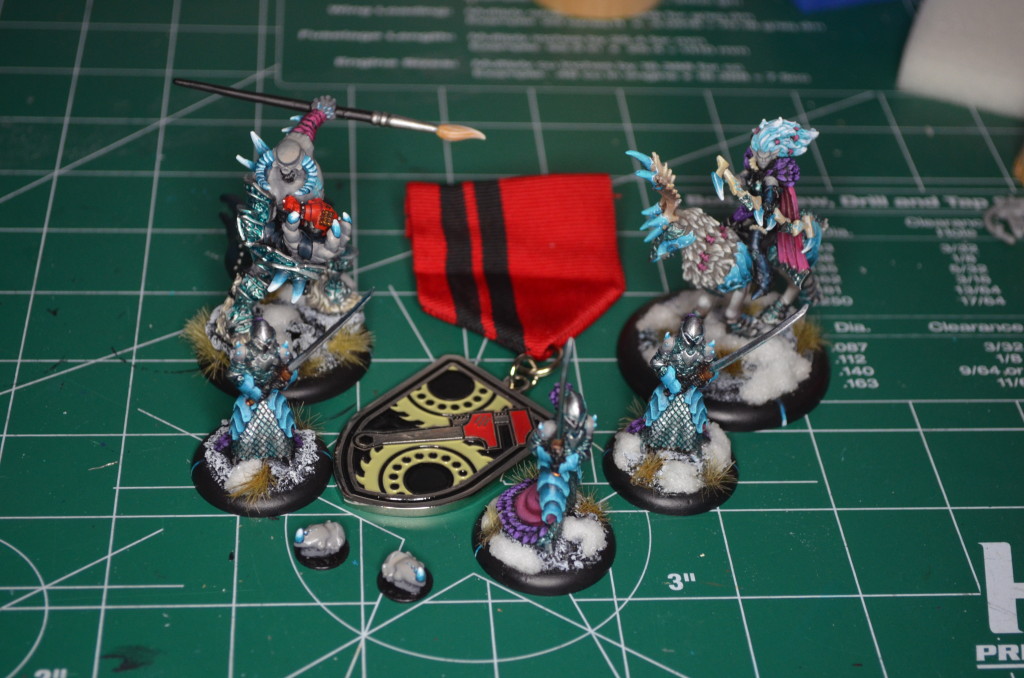 I was elated when I heard my name called!  All the stress and hard work had paid off.  I now have a fancy medal and my army will be featured in No Quarter!

The Privateer Press guys were still live streaming the Iron Gauntlet Qualifier games when they cut us from Hardcore, so I grabbed some dinner (Fish and Chips!) with Jamie “Northblade” Bell, of Hobby Hysteria and LHR fame.  When I got back, they took some photos for No Quarter.  I’m not sure if they’ll recap Templecon in the March issue (#59) or the next one, but keep an eye out!  I’m going to wait until the magazine hits shelves before posting any hi-rez pictures of the army.  Sorry!  Hopefully you won’t have to wait long.

For the rest of the day, I just enjoyed the con and showed off my models.  I got quickly side tracked, however, when a few locals pulled me over to check out Wrath of Kings, a game by CoolMiniOrNot.  Apparently, they’d gotten in the Kickstarter awards from their Kickstarter back in August of 2013, and were selling stuff at a hell of a discount.  Buying the $70 starter set got you the Kickstarter addons, and a free hardcover rulebook.

Once I recognized the amazing House Hadross (fish people!) models, I was in.  I had eyed them two years ago, but lacked the funding and local playerbase to invest in the game.  This time, though, the models were on hand, two people had already bought in, and it was almost $200 in product for $70.  I couldn’t say no.

That night, we got drunk on whisky, and played King of Tokyo.  I did not win, despite playing as the Kraken.  Panda is OP!

Sunday morning I got to play one of the Warmachine games I’d been looking forward to since last year:  my game with Tony Konichek, PP’s Video Producer.  Ever since we’d played last year, we had decided to make it an annual thing.  Tony was also playing Legion of Everblight, and ironically, his scheme is also based off Todd Arrington’s BlackFrost Legion from NQ #33.  Tony was fairly new to Legion and Hordes in general, but our game wasn’t aimed at being competitive so we took the opportunity to play a learning game.

We discussed playing tightly to the rules and we also took time to analyze all of our options during both of our turns.  This let us discuss what course of action had the best chance for a favorable outcome, and it was amazingly insightful.  While I didn’t win the game, my turns were the most lethal I’d taken all weekend.  In the end, Zuriel took down Thagrosh while under Lylyth1’s feat.

Tony and I had a great time discussing tactics, probabilities and miniature painting.  That’s the stuff I enjoy most about these Iron Arena games.  Very little of what happens on the tabletop matters – it’s all about sharing some time with people, and having fun discussing whatever happens to come up.

I played a few more Iron Arena games for the rest of the afternon, for the hell of it.  I wanted to show off my medal and models, and I was roughly halfway towards another piece of Concept Art, so I figured I’d try and bring home two.

It was almost closing time by the time I’d racked up enough points, but I’d managed to get my hands on this amazing autographed Seraph print by one of my favorite WM/H artists, Florian Stitz. 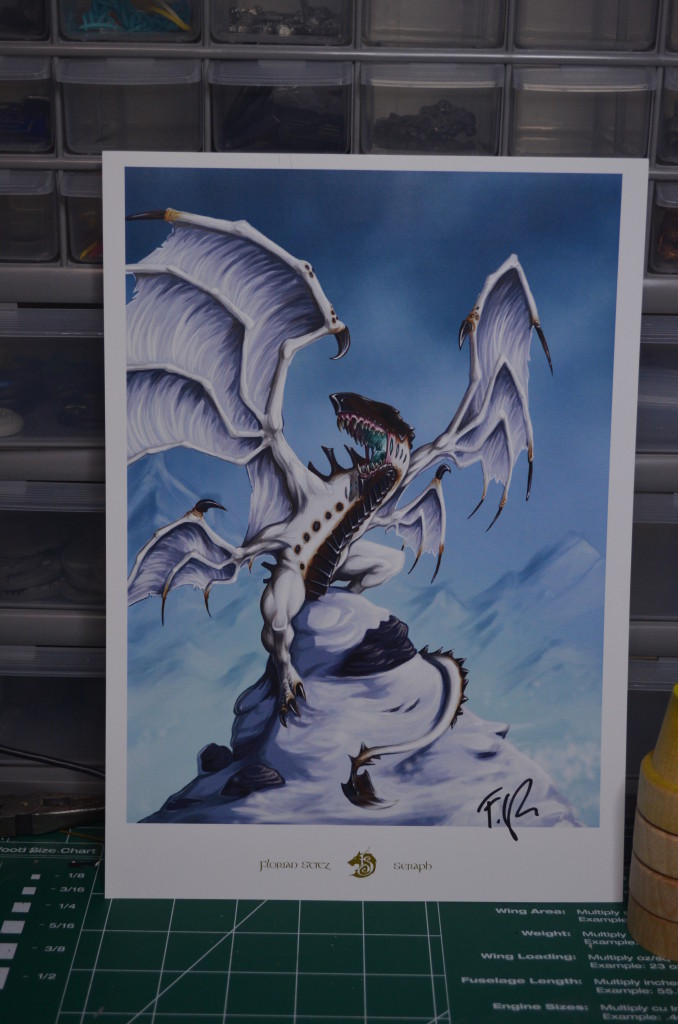 I mean, just look at him!

One of the things I love about Florian’s art is that it looks like it’s done with an actual paintbrush.  It doesn’t have those perfectly blended gradients and razor thin lines that are all over digital game art these days.  You can see the brush strokes, you can tell which direction his hand was moving when he drew that line, or shaded that muscle.  Those insights into an artist’s process are what I find interesting whenever I go to a museum or art show.  I want to understand how the artist put the image together.

The Seraph’s going to look fantastic on my wall of Legion art in my studio.

I read through my Wrath of Kings book most of the train ride home, and we discussed various game and Organized Play ideas.

Templecon’s definitely a show that you can’t afford to miss.  I’ve enjoyed it every year, and I look forward to going back in the years to come.

Winning Master Craftsman was the highlight of the con, along with all the great games with new and old friends alike.

Now, can I win Master Craftsman for a second year in a row?