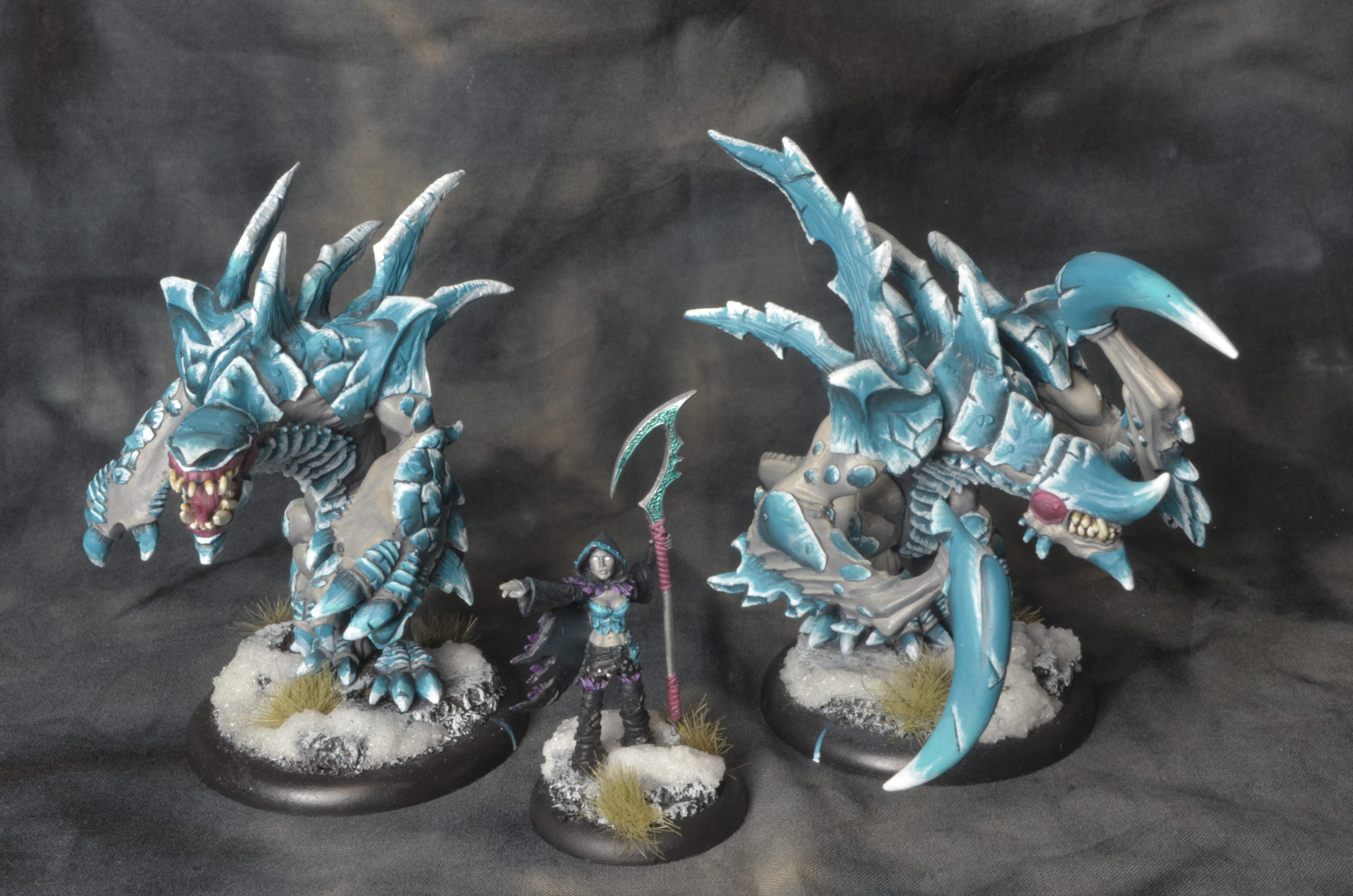 This post has a ton of pictures.  Be warned.  Also, you can click on any of them to see a picture roughly 8 times larger.

I know TempleCon was three months ago. I’ve waited this long to show off the army because PP took photos of it for No Quarter at TempleCon, and they haven’t printed them in the last two issues, so I assume they’re not going to.

My warcaster of choice was Thagrosh, Painter of Everblight. Not only is he a fantastic center scenario caster, the alternate sculpt that emphasizes the hobby is fantastic. Plus, he’s a pretty new sculpt, and judges like seeing the newer models. To represent Thagrosh’s FURY, I glued rubber shredders from the Blighted Bather model to some washers and quickly painted them in my grey and teal. They then got a serious protective coating of gloss. 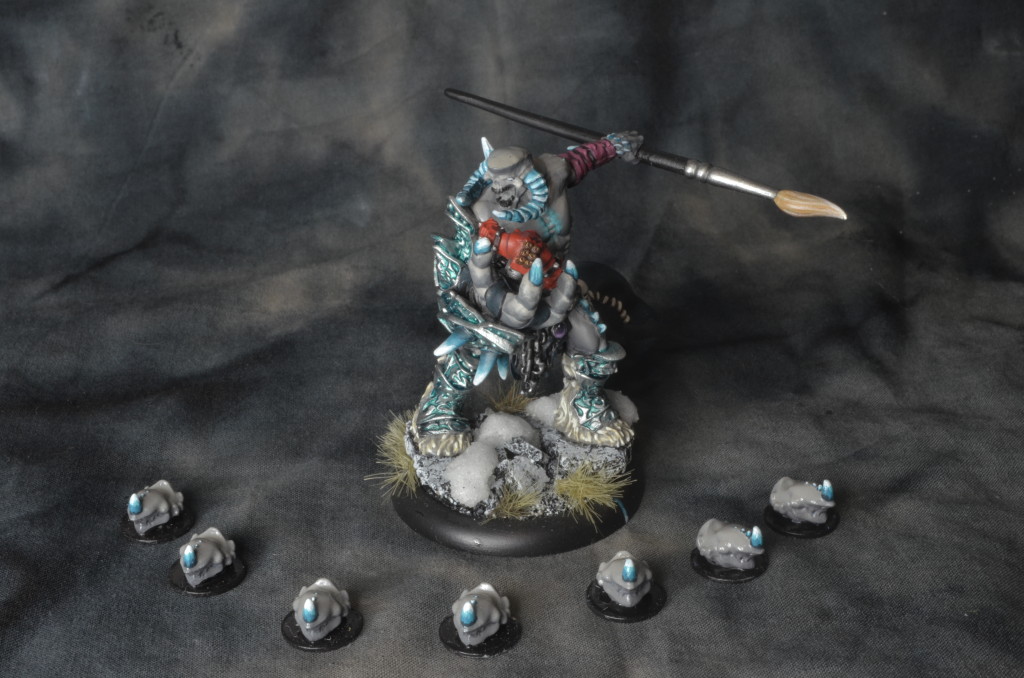 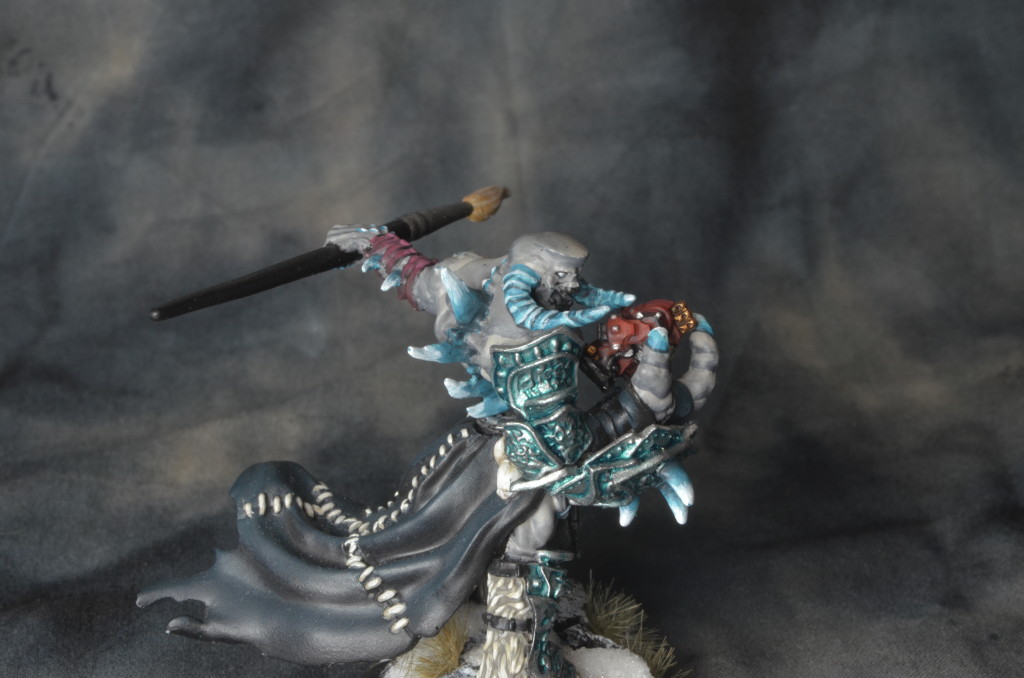 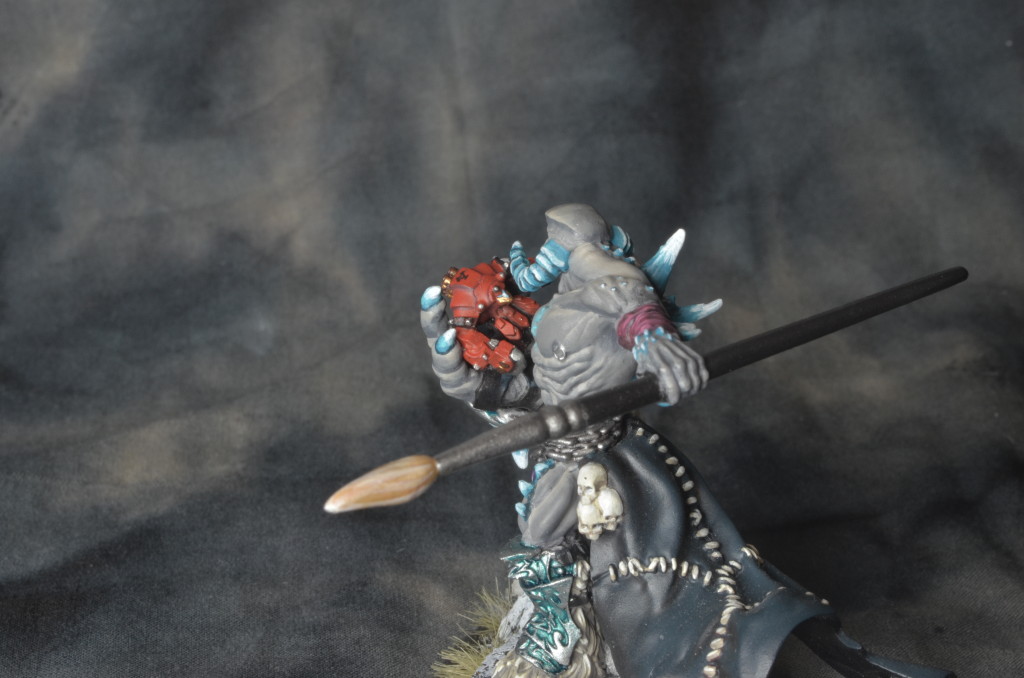 Since Thagrosh’s schtick is bringing a dead beastie back, I needed lots of beasties.

With the Carnivean’s animus granting +2ARM, and having a spray, it was an easy choice.  In order to give the typically static model some life, I headed up the Carnivean’s arm and bent it at the elbow.  It makes him seem a little bit more ponderous.

The Scythean gives me some distance with Reach and some Tough hate, should I come across Trolls or Rhupert.    The scythean’s arm was simply rotated up one notch.  This gives it more motion. I couldn’t run all melee, though.  I needed something that can shoot to apply pressure, so my opponent can’t just sit back and shoot me to death.

The Ravagore does that nicely, and offers some board control with it’s Scather animus.   The Ravagore is essentially walking artillery, so I propped him up on a rock and swung his arms out to the sides.  This helps amplify the idea that he stands around spitting massive fireballs.

The Seraph is a utility beast with it’s short ranged multi-fire capabilities and it’s speed enhancing animus, Slipstream.  The tail on the stock model is pitifully small, so I borrowed one from the Teraph.  The fireballs are from the old metal Pyre troll.  I used three and pinned them together to represent the d3+1 shots from the Seraph’s strafe. 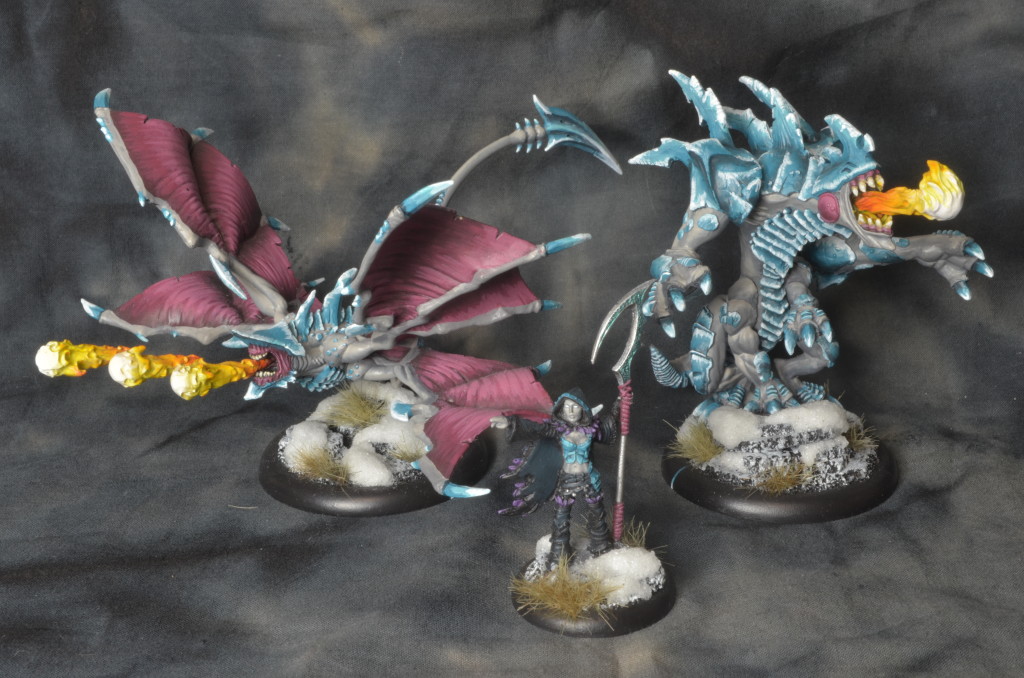 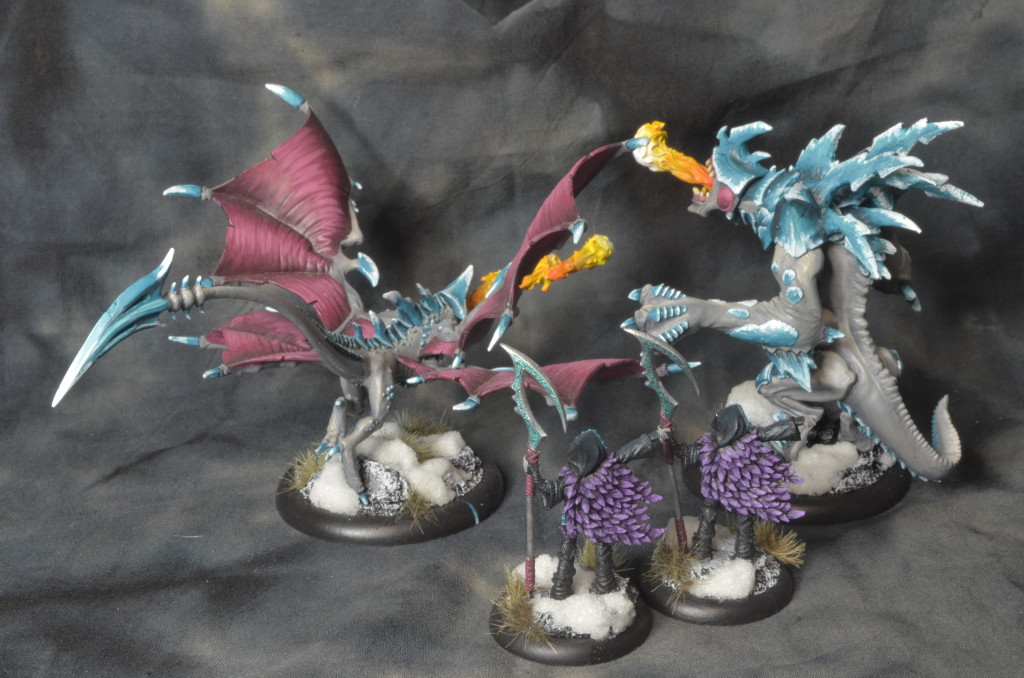 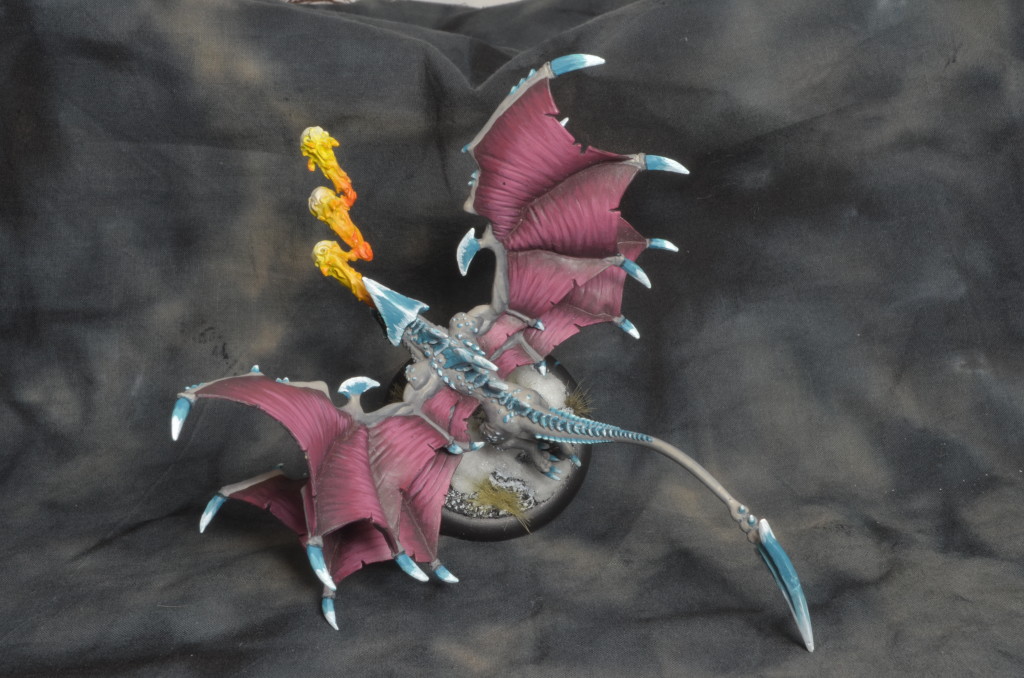 In order to buy myself time to get my beasts into a good position, I needed a delay tactic.  No one does tar-pit better than Legionnaires.  Cheap, tough and with vengeance, they love standing out front and taking punishment.  These guys were mostly metal in the front, but have some cloth and feathers in the back.  The cloth colors match up with the wing membrane colors, so that helps tie them into the rest of the scheme beyond just the teal armor. 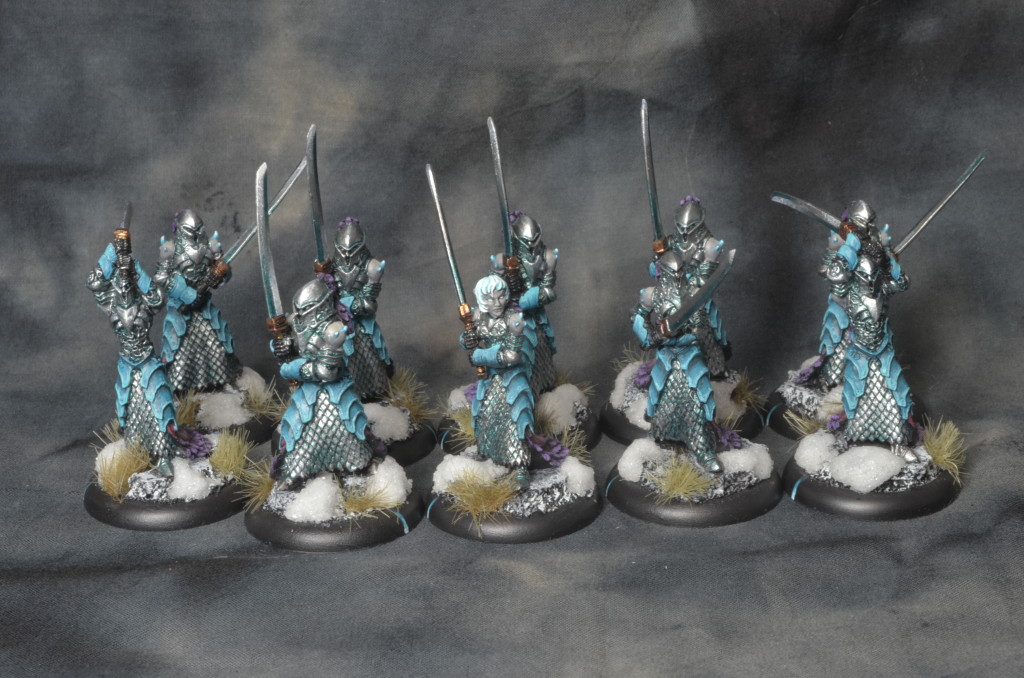 Where Legionnaires go, a Spawning Vessel is sure to follow.  The small unit converts dead guys into lesser warbeasts.  Typically, the acolytes haul over dead bodies, toss them into the vessel and use the blood and bio-mass as a channel for the warlock to summon a new lesser warbeast.

In my case, I was using the Blighted Bather, another exclusive alternate sculpt.  Instead of a blood covered beast crawling out of the vessel, this model has a shapely acolyte taking a bath.  It comes with a little rubber duckie shredder, so I capitalized on that idea and made three little rubber shredder tokens, which would replace the corpse tokens usually used by the unit.  In this way, the acolytes were searching the dead bodies for their rubber shredders, and once they had collected enough, a lesser warbeast came to play with the toys. 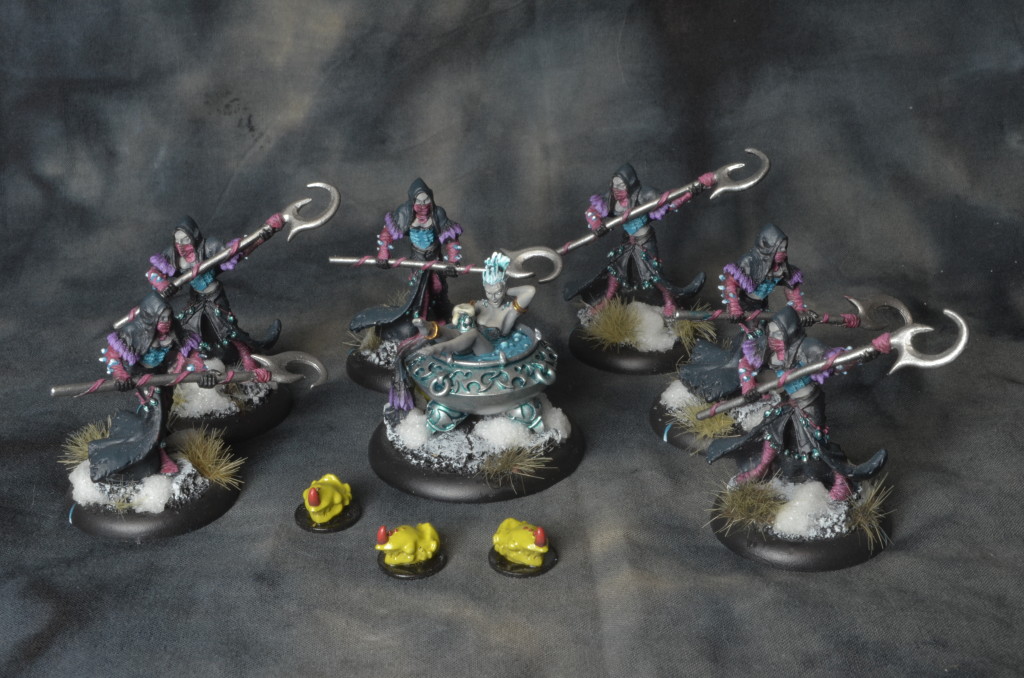 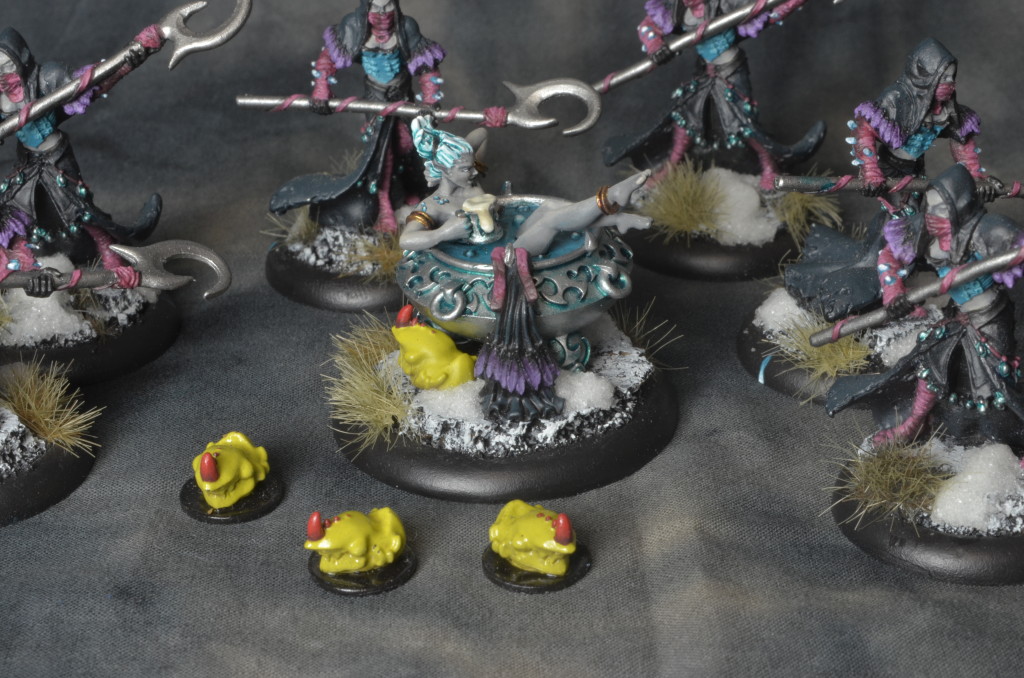 My army had a good supporting cast as well.  The two shepherds extended Thagrosh’s 14″ bubble and allowe d me to run heavy on the beasts.  I didn’t do any converting to them.  The succubus helps pass out animi and upkeep some of Thagrosh’s spells.  She’s also a crazy detailed model, and was fun to paint. 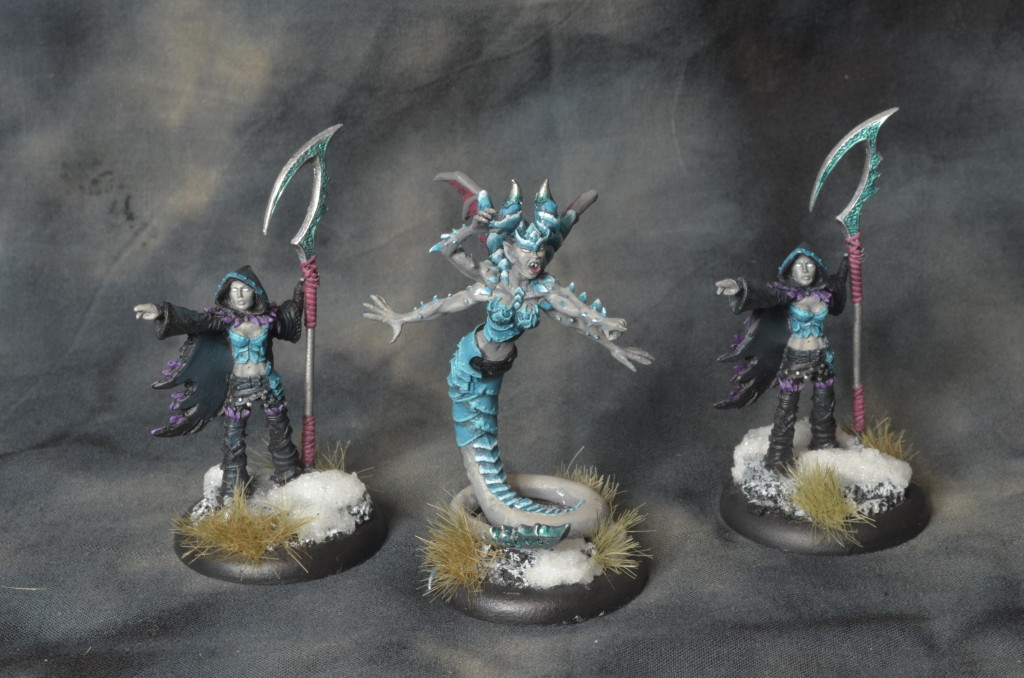 Lastly, Anyssa Ryvaal.  She was a fast harasser I ran down a flank to distract some part of my opponent’s army.  Since Hardcore focuses on a center scenario, if she can weaken my opponent’s center by drawing some things to a flank, awesome.  If left un-checked, she can easily pick off enemy support models and squishy bits with her poisoned bow. 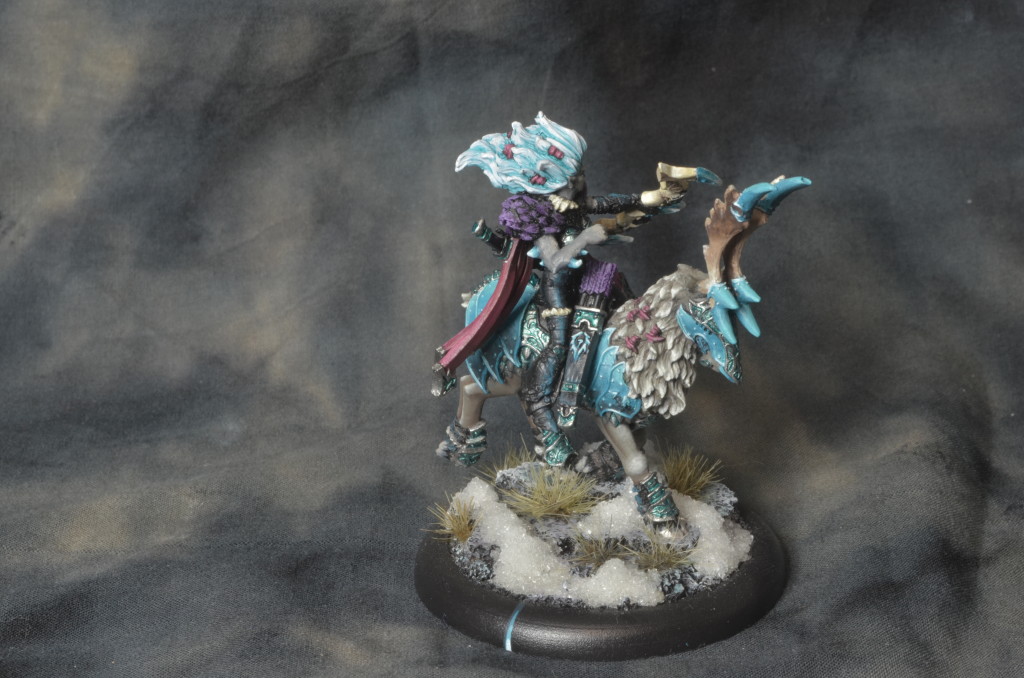 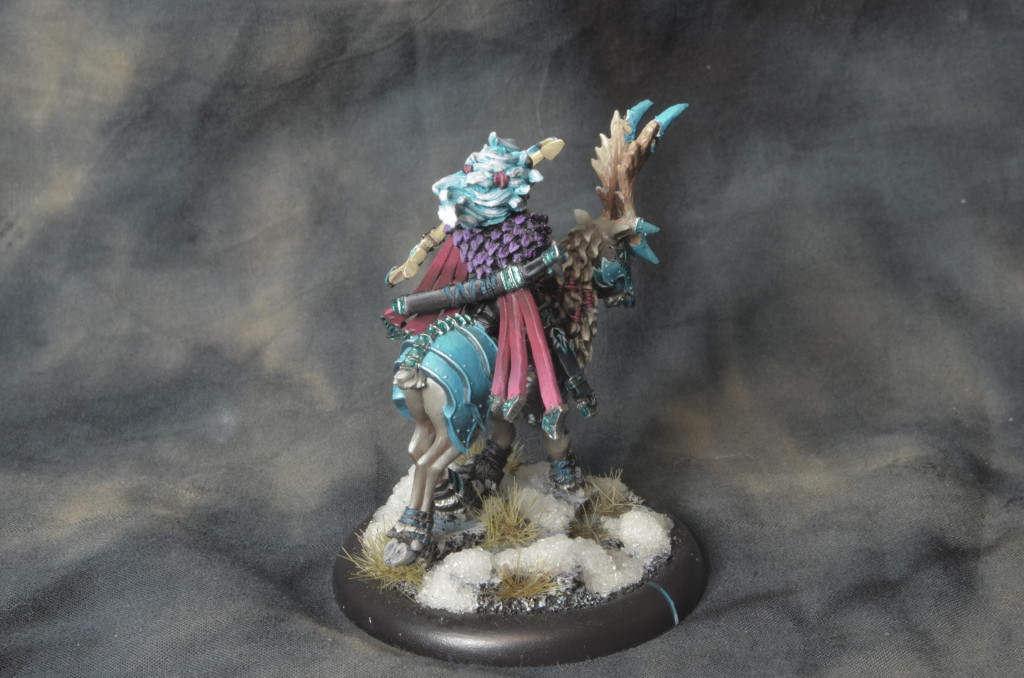 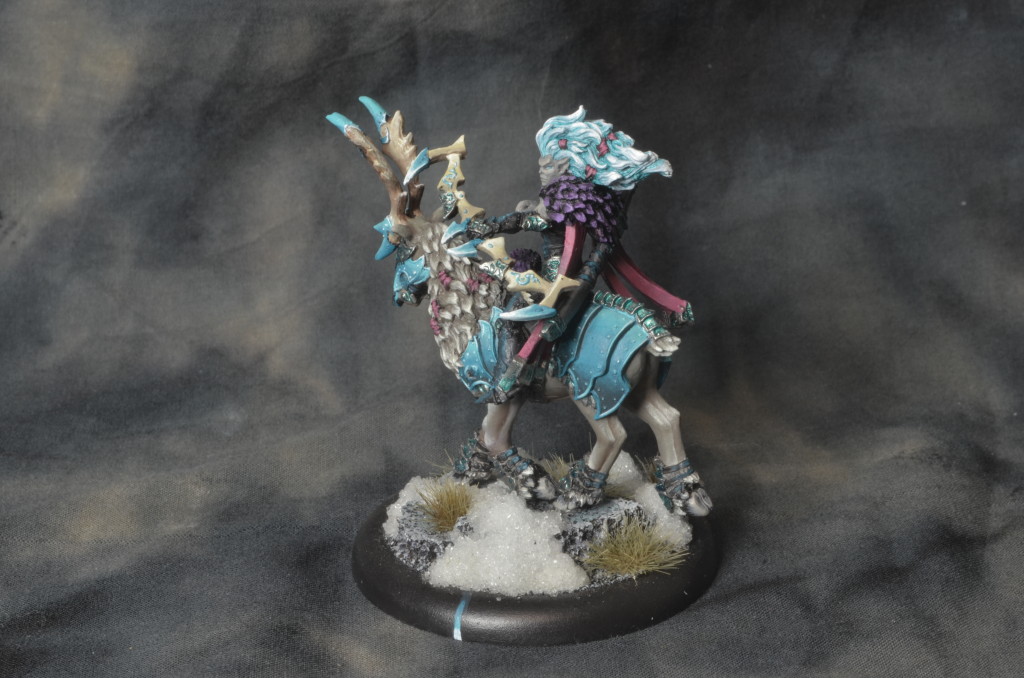 Overall the army was a blast to paint and play.  I won perhaps one game the entire weekend, but from my understanding, such is the curse of the Master Craftsman.

I’ve not competed in many single miniature competitions, but I can say the competing at the army level is vastly different.  None of these models would place in a single mini competition.  The army relies on the overall theme and cohesiveness, rather than on exacting fine detail.  It also allows you to do things you can’t with a single mini, like my rubber shredder tokens and exclusive alternate sculpt models.

I look forward to the next big convention on my schedule, the NOVA Open.  With some new additions and some luck, I’ll be adding a second master Craftsman medal to my collection.

Can you call a single item a collection?