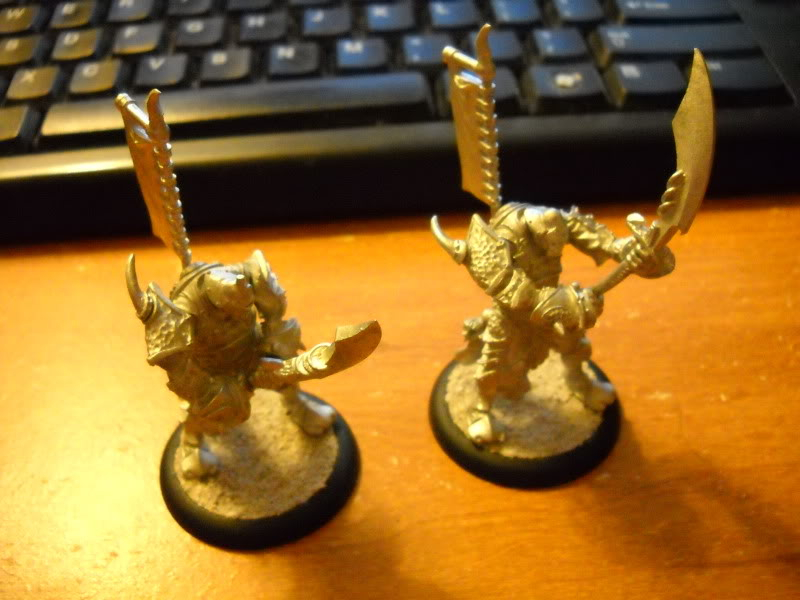 So, this time around I’m assembling the second Cyclops Savage.  All the same pins, in all the same places.  This time, however, I put things together in a much smarter order.  Until I realized I’d mixed up right arms.  You see, I got these models second hand.  I disassembled them, stripped them and then put all the parts to make each model in a baggie.  I test fit the arms, but somehow I messed it up.  So, in the middle of working on this second Savage, I realized my mistake.  I tore apart the previous one, had to drill out holes, re-pin a few joints, etc.  It was a mess.

Regardless, as requested, here’s a more detailed walkthrough for pinning a model to its base.

First, I drilled holes in everything:

Whew. Lots of drilling. But hey, it’s all out of the way now! After that, I test fit all the pins going into the body. It looked like a pin cushion when everything was done. Once they had all been trimmed to length, I glued them all in:

At this point, I pinned him to the base.  Be sure to have a long, straight pin in each foot. They should be pointing directly away from the flat bottom of the foot.  Trim them to the same length.  (See the left picture above as an example).  Position the body over the base and use your best guess to put the center of the body over the middle of the base. This guy has a sword hanging off the front, but also has a banner off the back.  If it were just the sword, I would suggest moving him back just a bit so the sword’s weight is over the base, but since the banner sort of offsets that, the middle will do.

Press the pins into your basing material so they leave a bit of an impression. On sand, this can be really hard to see. A sharpie or pencil helps. Drill a hole for each pin. Smother the bottom of the feet with superglue and slide the pins through the holes. Now, bend them over as close to the base as possible. You want to use the pins to sort of “clamp” the model to the base.

Some people then put a glob of greenstuff over the pin, other superglue the bent pin to the bottom of the base. Sometimes I’ll glue the pins to the base, but rarely.

The idea is that in order to pull the model off the base, the pins have to break, the superglue holding the pins into the base fails, or the base breaks. If any of those happen, someone likely owes you a new model because the broken one probably was pitched across a parking lot… It’s not coming off.

After attaching it to the base, I put the arms together. As I said earlier, I accidentally swapped left arms between the two savages, so this took a while. Luckily, there was a new episode of Castle on Hulu. No complaints! After the arms, I glued on the head.

All that was then left was the tabard on the back and the banner. Done!

And there you have it. Two very mean light warbeasts. I may see about doing something so the difference in the poses is a bit more visible.

A bit of muscle and another pin (I broke the left arm) and I have one guy about to thrust forward and one guy in a high block or downward chop. Awesome!