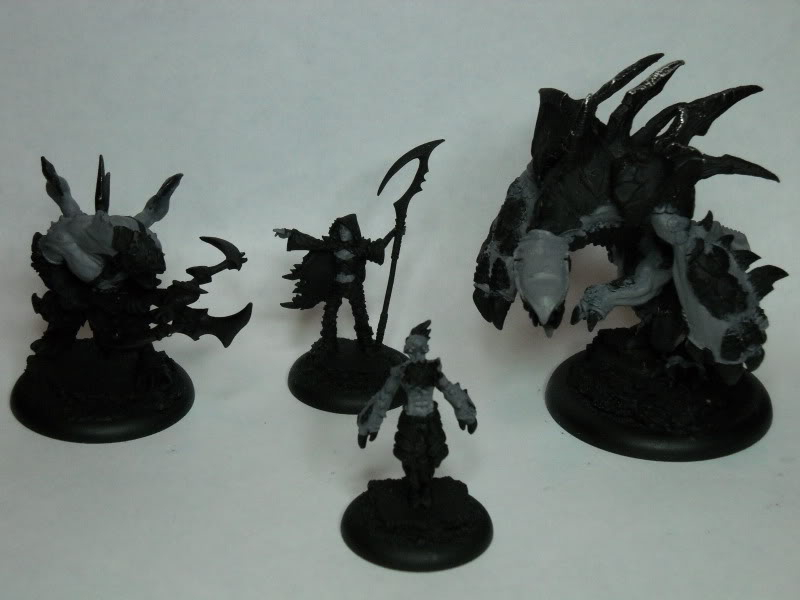 I had today off because it’s MLK, Jr. day, and I enjoyed a long day of WoW and painting.  Let me start at the beginning.

Saturday, my wife and I got up, got in the car, and headed to Baltimore for the tournament. I dropped her off at a history museum in town, then headed out to Glen Burnie. I got there, got to the store, and realized everyone was playing Warhammer Fantasy. I pulled out my hand dandy Blackberry to find out that I was off by a day. My tournament was tomorrow. My language was colorful, to say the least.

It wasn’t all bad though. The store did have Old Witch & Scrapjack who I have been having a hard time finding on Bartertown.com. They also had superglue. Yay!

I have a list that I’ve been playing with on the forum that is fairly solid with Irusk, Strakov, and Old Witch, so that’s a pretty nice variety with only caster swaps.

So, I called my wife, admitted my mistake and we toured the history museum for about an hour. They had a cool armory, and I took a picture with this shield gun.

I felt like a Man-o-War Shocktrooper! The plaque said the things were difficult to aim since it was too heavy. Not very practical. Hopefully the Man-o-Wars are better trained than the guys that used these.

After the museum, we stopped by Mama’s on the Half Shell, and I had the largest Fish’n’Chips, I’ve ever had:

Sunday, I worked more on Karchev. I built a rear bumper looking apparatus out of wire:

I then clad this in plasticard and mocked up a skirt type deal with sticky-tak. I’m trying to capture the movement as he’s running forward. The bottom part should be swinging towards the rear foot as the top starts to swing towards the forward foot as his hips are in the process of rotating the other direction. The yellow doesn’t show it terribly well, but here’s the WIP shot I took:

I’m thinking when it’s greenstuff and I add holes and tatters, it’ll look much better. If it looks terrible, we’ll call it a prototype and try again.

Lastly, I got my Legion for the Online Gamer’s Journal primed, and I’ve basecoated the skin with GW’s Codex Grey:

Yay! Busy weekend, and a short week, since this week is our scheduled Friday off. w00t.