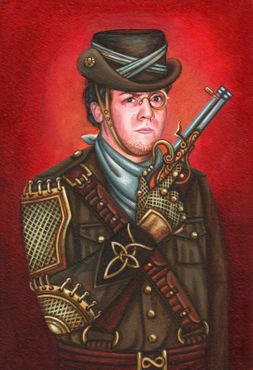 Wow, it’s been a week since I last posted!  I feel terrible!  I’ve been swamped with stuff this past week, so at least I have a good excuse reason.  We had to get the apartment ready for visitors!  That took a while since we have way too much shit.  Once the unpacking and sorting was done, we had visitors.  Since the office (computers and hobby area) is also the spare room, I didn’t have any time to work on anything.  Bad for the blog, good for my sanity.

Speaking of sanity, here’s what’s coming up in the next few months:

Despite my current slacking off, I do have news!

As you may remember, at Templecon I had the privilege of participating in a Dystopian Wars demo run by the fine gents over at D6 Generation. During that demo, I was pummeled by my opponents and had the worst luck imaginable. As a reward for being such a good sport, I was given to Spartan Games to be turned into a character in their next Dystopian Wars rulebook. The artist did an amazing job (given what they had to work with) and finally, here I am!

I’m not yet sure which faction I will belong to, or what my story is. I’m not wearing any known uniform, and there aren’t any easy to spot insignias. But, aren’t I a dashing fellow, with my pistol and monocle? I look dangerous… Grrrr…

I s’pose I do owe a hobby related update as well, eh? Since last time I was able to get Gore Red on the second Savage, and block out the metallic areas in Boltgun Metal on one of the savages. I need to go over it one more time to be sure I haven’t missed anything, and then I’ll block out the brass areas on top of the Boltgun Metal. Putting brass over silver like that usually helps the brass which tends to be a bit transparent. Once I get the brass on there, it’ll actually look Skornish, and picture-worthy.

Since I love seeing comments on here, tell me what you think of the portrait! What sort of tutorials would you like to see? Also, if you could see any conversion, what would it be?