Just a few weeks ago, I picked up the new 2-player starter and got my hands on the plastic Man-O-War Shocktroopers.  I took a cursory look at the models and liked what I saw.

Since then, I’ve been dying to sit down with the camera and a metal Shocktrooper and a plastic one to compare the two.  I really wanted to go over all the details.  I mean, we’ve seen some unboxings, but no one’s really gone into detail and looked at the resculpts.

So, tonight.  I did just that.

FYI, most of these pictures were scaled to a quarter of their size in order to fit into the blog, so click on any of them and you’ll see just how shoddy my photo skills are without the help of a tripod and lightbox.

Starting off, you’ll note that the model is split up into entirely different pieces.

The metal torso has two parts, whereas the plastic torso is a single piece.  The metal arms have the shoulderpads integrated right in, but the plastic kit has separate ones.  The metal shield is a separate piece, but for the plastic kit, it’s molded right into the arm.  The other arm is all one piece for the Plastic guy, but the arm is two pieces for the metal model.  Lastly, the plastic model’s legs have two extra pieces – the loin cloth and… for lack of a better term, buttflap.  Overall, the plastic model is only one more piece, and has loads more pose-ability. 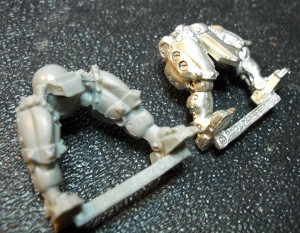 I’ll start with the legs. The plastic legs seem thinner side-to side, but about the same front to back. Also, the bulge on the thigh is not nearly as flat as on the metal model. The spikes on the knee are a bit bigger, and the… belt buckle (?) is much larger on the plastic kit.

There are holes under the belt buckle and in the back for the two pieces to fit into.  They do so snugly, like other PP plastic models, which is good.  The feet are also simpler, only two levels, not three. 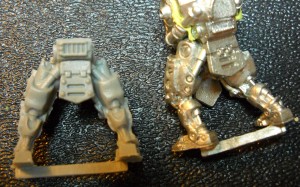 Further comparing the legs, the buttflap is smaller on the plastic model, but the rivets are larger.  You’ll also notice that they moved the boiler from the back of the torso to the legs. Interesting…

They also made the calf area smaller, and the detail is less defined.  It’s still there, but plastics can hold that subtle detail much better than metal models can.  Personally, I like the over pronounced details.  The Iron Kingdoms are a slightly less refined world, and I think the subtle details don’t adhere to that. 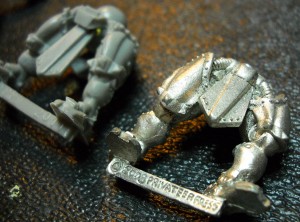 The front loin cloth part is a tad longer, and a bit thinner than the metal model, but otherwise very similar.  I think the hole that this goes in could be deeper, because I had to hold it in place while the glue dried.  This part doesn’t fit quite as tightly as the others.

Obviously, both still have the tab for the base, nothing different there.

Of course, the iconic part of the Shocktroopers are their shields, and rightly so.  That shield cannon is well recognized!  Luckily, the plastic sculpt didn’t mess with it much.  The shield overall tapers just a bit – larger on top, thinner on bottom.  Like the buttflap, the rivets are much larger, and less numerous.  The cannon barrel is deeper, giving it a more convincing empty look.  Lastly, the Khador Anvil is much more pronounced.  I like this, I think it’s lost a bit on the metal model. 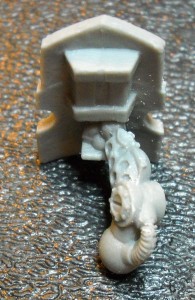 Looking at the back of the shield arm, it’s clear that this piec is a 3-part mold.  there’s a mold line running around the shield edge, and along the top and bottom of the arm.  This is great, because it means that the face of the shield, which everyone will see, is mold line free.  The edges of the shield are easy to clean, and the arm is mostly hidden by the massive shoulderpad, so well done PP on this.

The shoulder connection point to the torso is a ball and socket, so you can angle the shield however you want!  Unfortunately, the arm and shield are all one piece, so if you wanted the shield in a more common position (against the forearm), you’re out of luck unless you employ the services of a jeweler’s saw.  The arm still has that iconic hole filled arm guard you find on just about any ‘jack in the IK.  Glad to see those little details stick around! 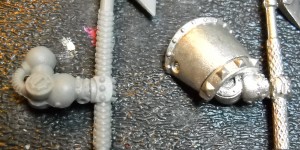 Comparing the little wheels on the elbows, you’ll notice they look completely different. Sure, they’re still a riveted ring surrounging a massive bolt, but the style of the ring is very, very different.  Also, the size of the wheel itself is different – the plastic one is smaller, less pronounced.  Again, I like the bigger, bolder detail.  It’s more in line with the aesthetics of the IK, in my opinion.

However, with the plastic model, you get to see the entire wheely thing, half it isn’t hidden by the shoulderpad.  They’ve also added a pipe or hose, which is cool.  I’m not sure what it does, but i’d certainly rather have it and not need it, than need it and not have it! 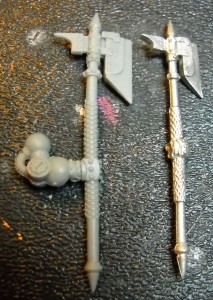 Moving on to the halberd, the first thing I noticed was the slightly larger blade.  I’m all about bigger weapons. Not only is the blade itself just a bit bigger, but the bulkier attachment plates around it are also.

The shaft is a thicker diameter also, and just a tad longer.  Of course, with a bigger blade, you need a bigger counterweight, and it has been adjusted accordingly.

I noticed while taking the pictures for this that the shaft was a tad bent.  I’ll have to see if my new found method for fixing plastics will work on that! 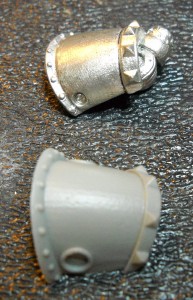 Another iconic part of the Man-O-War look!

Immediately, I notice the embossed collar around the bolt.  This was also a new thing on the plastic ‘jacks, and honestly, I like it.  I’m not sure why, but it fits for me.  I don’t remember who said it, but, “This is the Iron Kingdoms, not the Stainless Steel Kingdoms.”

I also noticed the the spikes on the plastic part are smaller and further apart.  That could be because it’s a slightly smaller part overall, but somehow I’m certain they’re smaller too.

One fantastic thing about having the shoulder pieces as separate parts:  You can control the side that has the Khador Anvil.  If you need two squads of the same flavor of Man-O-War, you could put the anvil on one side for the first squad, and then swap sides for the other unit.  You could then keep paint scheme fidelity, but still differentiate the models.  Also, if you have a friend that really likes to free hand stuff, and you love the Anvil, you could trade your blank shoulderpads for his Anviled ones.  There’s nothing on the bottom that makes them go on one side or the other, and there’s nothing stopping you from mixing and matching to suit your needs.  Cool, huh?

Well, that’s it for the part by part breakdown.  Monday, I’ll compare the overall, assembled models, and I’ll discuss how to magnetize them.  I found Bombardier arms and a spare set of Bombardier Shoulderpads on eBay, and I’m going to magnetize the Shocktrooper bodies. Another fantastic bonus to the plastic kits!! 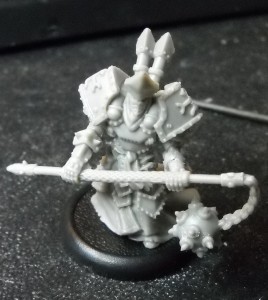 Oh, sometime during the taking of pictures and writing of this article, a Kreoss was assembled.  Not entirely sure how it happened…

Before I fully assemble the Shocktroopers this weekend,  were there any other details about the plastic and metal models you had?  Something you want looked at?

Let me know in the comments, and I’ll get you an answer by next time!